Seth was and is a non-physical entity who shared wisdom and knowledge about the greater reality of which we are all a part. He was compassionate and cared deeply about the human condition. He spoke to assist us in co-creating a better earthly experience for all. His vision is very much alive and his words have so much to teach us today.

It is Seth who coined the term: “You create your own reality.”

He offered thoughtful guidance for personal healing, spiritual development, and limitless creativity. He gave us useful instructions and maps for the exploration of consciousness, which we are all free to embark upon at anytime.

All of the books are still in print and you can readily find Seth Speaks and The Nature of Personal Reality at most major bookstores. Seth readers gather in homes around the world for private Seth Discussion Groups to study the information. Seth’s online presence is vast, with many websites and social media sites promoting Seth’s ideas. There have been Seth conferences worldwide and magazines dedicated to this body of work.

“What I will tell you has been told before throughout the centuries, and given again when it was forgotten. I hope to clarify many points that have been distorted through the years. And I offer my original interpretation of others, for no knowledge exists in a vacuum, and all information must be interpreted and colored by the personality who holds it and passes it on. Therefore I describe reality as I know it, and my experience in many layers and dimensions.”  [Seth Speaks, Session 511]

This information continues to inspire, empower, and add to the well-being of individuals all over the world, and the collective development of humanity’s consciousness. Seth’s influence has had a profound and positive effect on the fields of spirituality, human potential, consciousness studies, scientific inquiry, historical revisionism, psychic awareness, and philosophical discourse for over 50 years.

It’s simply amazing what two people can do… especially with a little help from an invisible friend. 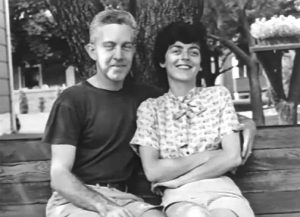 They lived at 458 West Water Street, Elmira, New York for 15 years from 1960-1975. Jane and Rob met Seth in 1963 through communications via a Ouija Board. Jane began channeling Seth shortly thereafter. While Jane channeled, Rob took meticulous notes and transcribed the nearly 1,800 sessions that Seth delivered.

For 20 years they worked as a team bringing forth some of the most remarkable information ever produced. Twelve of those years were spent right here at the Water Street House, where the majority of their books were written.

Again, 45 books emerged from this unique collaboration. Nearly 8 million copies have been sold. They have been translated into over 11 languages. All of the books are still in print.Their most popular works and notable bestsellers were created at “The Seth House” from 1963-1975, including:

Jane’s books include: The Seth Material, The Education of Oversoul Seven, Adventures in Consciousness, and more.